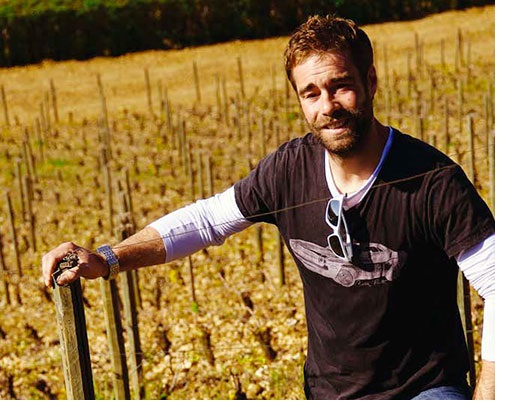 Le Domaine Didier Dagueneau extends over 12 hectares on the hill of Saint Andelain in Pouilly sur Loire, near Sancerre, on the Cher / Nièvre border. In this region of the Loire Valley, Sauvignon is king.

Didier Dagueneau, who died in 2008, was an emblematic figure of the Pouilly-Fumé appellation, and more generally of white wine in France. Today,...

Le Domaine Didier Dagueneau extends over 12 hectares on the hill of Saint Andelain in Pouilly sur Loire, near Sancerre, on the Cher / Nièvre border. In this region of the Loire Valley, Sauvignon is king.

Didier Dagueneau, who died in 2008, was an emblematic figure of the Pouilly-Fumé appellation, and more generally of white wine in France. Today, his children, Louis-Benjamin and Charlotte, have taken over the vineyard and produce, with perfect continuity and sensitivity, the Pouilly and Sancerre sought throughout the world for their extraordinary finesse: pure sauvignon to the extreme.

In a few years, the children have already made a name for themselves! Louis-Benjamin was voted winemaker of the year in 2016 by the Revue du Vin de France.

After a good sports career (sidecar races), Didier Dagueneau made his classes of winemaker and realized a sauvignon of assembly on his soil of Pouilly-Fumé. He then calls himself a good disciple of Henri Jayer: "You're going to Burgundy, you drink Gevrey-Chambertin, Chambertin Clos-de-Bèze, etc. You take your car and you see these terroirs with these different soils, these different sun exposures ... And we, in Pouilly, we have exactly the same thing! We have this complexity of terroirs." He decided to turn to Marcel Gitan, a winemaker who was already making a vinification in single vineyard in Pouilly (pioneer!).

It is from this moment that Didier Dagueneau begins to produce the magnificent "Silex", or "Pur-Sang" . At the time of these important changes, the wines of Pouilly-Fumé were far from being anonymous. But they were sometimes considered as "little Sancerre". The new generation of which Dagueneau was a part has radically changed the face of the appellation. Thanks to a scrupulous work in the vineyard and new technical skills in the cellar, Didier Dagueneau was the creator of white wines that offer incomparable richness and righteousness in the expression of terroirs. Today under the authority of Louis-Benjamin Dagueneau, the estate benefits from an ultra-modern cellar equipment, three weather stations and one employee per hectare (in a "normal" vineyard , it's much less!).

Work on the vine is mainly manual throughout the year, including during the harvest where 50 to 70 cutters are used to pick everything up in an express time and at the ideal time. All the rest of the vinification follows the meticulous precepts erected by the father and so well applied - even improved - by the son, with a particular attention fixed on the breeding, culmination of a score at least symphonic ...

Robert Parker's Wine Advocate : Didier Dagueneau’s son Louis-Benjamin (whose name now appears on the label) is in charge of the domaine that his recently-deceased and much-lamented father brought to such notoriety. Benjamin Dagueneau – whose intense focus is obvious – has been working alongside his father for several years, and the crew here – one person each for the estate’s 11 hectares (27 acres) – are no doubt exceptionally capable of carrying on. The 2009 collection (whose Pouilly-Fumes weigh in between 13 and less than 14% alcohol) promises to be the best group of Sauvignons rendered in that year. A late June visit offered my first opportunity to taste the Dagueneau rendition of Sancerre Monts Damnes (of which 2005 was the inaugural but 2007 effectively the first commercial vintage). All of the 2009s were still in barrel when I visited. The 2008s – harvested a mere two weeks after Didier Dagueneau’s death in a flying accident at age 52; and in bottle for only two months when I tasted them – are also superb as a group. The fermentative and elevage regiment here has for some time been entirely in larger barrels, in particular demi-muids and customized, 350-400-liter, cigar-shaped casks of Dagueneau design that maximizes lees contact. Fermentative temperature is controlled when necessary by inserting an exchanger. In view of how long Didier Dagueneau’s success had been recognized and how many ambitious Loire attempts at wooded Sauvignon prove inexpressive of their fruit and sites but depressingly similar to one another, one would think that the “methode Dagueneau” should be studied and adopted by at least a few other ambitious Loire growers, but it that’s happened, I have not tasted it! Incidentally, this is one domaine where (already high) prices have not remained static, so unfortunately it’s simply a fact now that you have to make the same well-justified sacrifice to experience these wines that you would in order to put top-notch Burgundy on your table.. (Incidentally, while this is the subject for another time, the nobly-concentrated Dagueneau Jurancons – of which I tasted a 2005 and 2004 – are magnificent, with superb detail, magical levity, as well as irresistibility rather than over-the-top sweetness. “The idea is to have a balance with high acidity, not a confiture,” remarks Benjamin Dagueneau. “Chateau d’Yquem is very good, but heavy. These wines aim at something a little more Germanic in style.” I was already grinning before he said this!)

Shorten
Read more
There are 4 products.